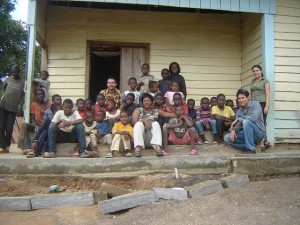 “To celebrate without having done work is to lose your pride.”

This past Friday, I traveled to the , a village with no electricity or water, where about 100 people live. Including one of three Kentaja Orphanages. Michel drove me there, down the rocky path, crossing bridges consisting of a few boards, and into what felt like the heart of the forest. Tim went with me, as well as Angel, another volunteer, and his counterpart, a last minute decision after finding out that he knew quite a bit about installing wells! A few days earlier, I was talking to Ernest about the trip, and realized that he is from this village, which was another kind of act by something greater, because he is a wonderful friend and to have his support and encouragement for this project, and to make him so proud, is just like a cherry on top of the sundae. So we drive into this village and everyone stops what they are doing and looks. Kids run up to the truck and the women wave, and everyone is smiling. At the top of the hill at the end of this road was the orphanage, where 30 children lived. We toured the place and took photos with the kids. And I met Ernest’s mother, and his grandmother, who is in a video but I had forgotten that she doesn’t speak French so when I asked her to greet my family, she just sat there! Haha. Ernests’ mom cooked a huge meal for us, and he gave her the BoGo light I had given him for her, and she was so appreciative! Later on, I was standing at the top of the hill, in awe of the kindness of the village and inspired by Michel’s motivation to do good things for others, and Pere Michel tells me that I encourage him, that I bring hope to the community; all I could say back was that he did the same for me! That same evening, he took me back to Bare where I typed up the letter he wrote to request a volunteer at one of his orphanages. He kept telling me how efficient and motivated I was, but it was as if I had finally found myself working with someone that is just as motivated! I told him what to do and he listened! We just worked! And the day ended up being extremely productive. I felt that it was what I was supposed to be doing, like I was really helping someone because he actually wanted me help- – and in the end my hope is that this village will have water. These are the kinds of things will not allow myself to feel useless for years to come, when I can think of my value as a person and look back to these days when I truly helped someone in the most need. I’ve said jokingly how my karma would be good automatically by doing Peace Corps, haha… but it does feel that way when I’m out doing things like this.

I wish that I could feel this productive every day. These are the ones that make all the mediocre ones in between worth it, as well as lift me up for the next time being of struggling and pushing and being stubborn enough to deal- haha maybe these same traits that my mother always complained about have come to be somewhat handy!

Tara Menendez
Tara has always had a passion for discovering new cultures, from convincing her mother to host a French exchange student in High School, to studying abroad twice, coordinating exchange programs at her university Study Abroad Center, to spending a month backpacking through Europe. She holds a Bachelor’s degree in French with a minor in Communications. A Returned Peace Corps Volunteer who lived in Cameroon, West Africa for two years, she looks forward to guiding you on some exciting adventures that will make the world a bit brighter! She’s also a travel writer/blogger at Eat.Love.Volunteer, business owner, property manager, wifey, mother, and humanitarian. Tara lives in Dallas Texas, where she’s happily married to the tech genius who built and maintains this beautiful website!
Previous postAll I Want For Christmas!
Next postLittle Elephant Town